Hoverloop is a splitscreen aracde arena combat game made by alumnus Philippe Mesotten and Lars Driessen, together they form Not A Company.

In Hoverloop you have acces to an array of customizable drones, each with it's own unique ability like teleport, deathray or shield.

Fight against or work together with friends in splitscreen/online multiplayer. If you would rather go solo, that's also possible, with AI-bots in a variety of game modes.

Hoverloop will be available for PC and Xbox one. 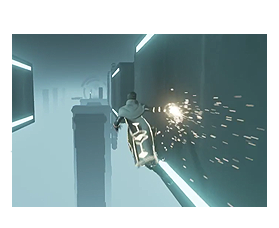